To share your memory on the wall of Irene Kalawaia, sign in using one of the following options:

Condolences may be sent to P.O. Box 11362, Lahaina, Hawaii 96761
The family will be streaming live on Facebook on Leimomi Santana’s feed.
Read Less

To send flowers to the family or plant a tree in memory of Irene Hueu Kalawaia, please visit our Heartfelt Sympathies Store.

We encourage you to share your most beloved memories of Irene here, so that the family and other loved ones can always see it. You can upload cherished photographs, or share your favorite stories, and can even comment on those shared by others.

Posted Jan 18, 2021 at 10:16am
In the early spring of 1972, my mother - Lois Loika Hueu Cummings and I relocated from Northern California to mom's island home of Maui. In the mid summer we ventured out to Lahaina with some of our ohana - Pualani Kaauamo Kimokeo, Puala Kaauamo Kekiwi and Ehukai Kaauamo. It was on this trip that my Mom - Aunty Lois was to meet her baby sister, Aunty Irene Hueu Kalawaia for the very first time! It was a classic event! My cousins shared stories of this wonderful woman, Aunty Irene. Mom clearly thought this must be a relative on their father's side and had no clue that this was HER sister!

A little backstory: Mom was born to James K and Nancy Hueu in December of 1922 and was the youngest of five. Shorty after mom's birth her mother passed and Tutu Hueu was not quite able to raise and care for his young family. All were basically sent to live with relatives while Tutu continued on and eventually remarried. It was in this second marriage that other siblings came to be including Aunty Angie, Uncle Jacob and Aunty Irene. Obviously mom had no knowledge of these additional siblings and following her departure form Maui to Oahu in 1934 was unaware that her father had been diagnosed with leprosy and move to Kalaupapa, Molokai.

As the years transpired, Mom married and relocated to the mainland, yet maintained correspondence with her remaining siblings on Maui over the years. Several moves placed our family in Southern California and sometime in 1957 mom's eldest brother - Uncle Keola happened to send a letter announcing that another brother - Uncle Jacob Hueu had joined the Marine Corps and was stationed at Camp Pendleton. Mom was slightly taken aback as up to this point was only aware of herself her brother & 3 sisters, Nancy (Ku'ulei), Sarah (Ah Kuna) & Nellie (Kaimu). After meeting Uncle Jacob, he became an integral part of our ohana, however he never mentioned his sisters? Partly again, following Tutu Hueu's departure to Kalaupapa Uncle Jacob's siblings were also sent to family members.

Again, back to the meeting: Since Uncle Jacob never mentioned other siblings, Mom insisted that she was the youngest daughter only to meet in person her baby sister Irene. There was little doubt that these two were sisters as both looked so very much alike. This chance meeting, forever changed the landscape of our lives.

Aunty Irene and her ohana became like mana to us. Our extended family became so much more enriched. You see, Ohana relationships are like no other on earth. Primarily living in a place that is completely surrounded by water creates deep rooted relationships woven with an unsurmountable sense of belonging. Your Ohana becomes your life, wholly, interdependent and close knit! No other person I know understood and exemplified this characteristic like Aunty Irene.

Her life was filled with what many may refer to as challenges, yet for Aunty they were revered as "blessings". What we refer to as sacrifice, Aunty viewed as opportunity and treasure. Her life and her legacy remain a vivid blessings in the lives of those who played a role in it. Being to many of us as our, "second Mom", Aunty will continue to be cherished, revered, and remembered with honor and grace.

To our Cousins, Leimomi, Kawehi, & Keola, and your families know that our hearts, our aloha, our prayers, and deepest sympathies remain with you! Aunty's legacy as a humanitarian while somewhat meek & mild gave many a profound impact and defined generosity greater than any dictionary could possibly define. Her humility and kindness extends the threshold that any wealthy philanthropist could ever hold homage to, as Aunty's HEART was larger than her whole being! We will forever cherish her as she truly taught us the greatest lessons of what the Aloha Spirit means through her love, her smile and her infectious laugh.

A hui hou Aunty Irene, please share our love and embrace with all ohana, but especially with your sisters and brother and a special hug for our Amy Lynn & Paige.... 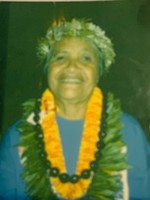 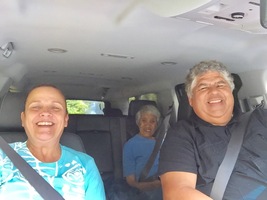