To share your memory on the wall of Adam Kaiwi, sign in using one of the following options:

He is survived by his children Jacqueline (Hayden) Woodward, Aileen (Clayton) Carv... Read More
Adam Lupi Kaiwi, 94 of Hana, Maui peacefully passed away at his residence on Friday, November 20, 2020. He was born on October 27, 1926 in Kipahulu, Maui.

Adam “Papa Jack” was a hard working man. He was a man of many trades from construction at Grace Brothers, to ranching at Kipahulu Ranch, to maintenance and repair at Hasegawa General Store. “Pops” was well respected for his fluent speaking of Hawaiian language and many sought him for his wisdom concerning Hawaiian medicinal remedies. He was always found with a smile on his face and an extra kick in his step.

To send flowers to the family or plant a tree in memory of Adam Lupi Kaiwi, please visit our Heartfelt Sympathies Store.

There are no events scheduled. You can still show your support by sending flowers directly to the family, or planting a memorial tree in memory of Adam Lupi Kaiwi.
Visit the Heartfelt Sympathies Store

We encourage you to share your most beloved memories of Adam here, so that the family and other loved ones can always see it. You can upload cherished photographs, or share your favorite stories, and can even comment on those shared by others.

Posted Jan 18, 2021 at 10:16am
To Uncle Jack's Kaiwi family,
I want to express my most sorrowful condolence to the passing of a great man. I am Derrick Wong formerly of Hana, I am the grandson of Margaret and William (TuTu) Starkey. Aunty Helene was my aunt, my mom is Emelia (Aunty Amy) Lim one of her sisters. I grew up in Hana until I was 11 years of age and grew up with Jacqueline, Paul, Judy, Leroy, Eileen and Annette. I remember Uncle Jack as a wonderful and hard worker, remembered him as a ranch hand at Kapahulu Ranch with my grandfather as the Ranch Manager. I last met Uncle Jack in 2014 when I visited Hana and met him at the Hasegawa Gen Store. I am visiting Maui next year and had wanted to meet with him and other family relatives. I will stop and visit Puuiki Hill church to pay my respects to the family when I go there. I am so sorry for your loss of such a patriarch, a great man, my Uncle. Aloha.
Comment Share
Share via: 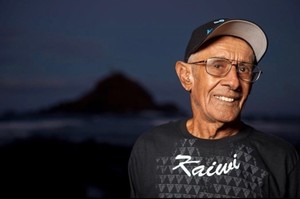