To share your memory on the wall of William Gormley, sign in using one of the following options:

He is survived by his two children, Setsuko Regina "Gina" and William Joseph "Joey", IV. He is preceded in death by his parents Regina and William Gormley, Jr., brother Joseph G. Gormley, and sister Sr. Regina M. Gormley S.S.J.

After a few years in the seminary, Bill decided to serve his country and joined the USAF where he retired as a radio operator. He had a passion for ham radio, cooking, was an avid sports fan of the Philadelphia Eagles, 76ers, and Phillies, and loved to talk. He was a walking encyclopedia.

Due to the current health crisis, a memorial service will be held at a later date. He will be buried at the National Memorial Cemetery of the Pacific. In lieu of flowers, donations in his memory may be made to A Call To Mercy, 130 Whispering Oaks Drive, West Chester, PA 19382 or at http://www.acalltomercy.org/

To send flowers to the family or plant a tree in memory of William Joseph "Bill" Gormley, please visit our Heartfelt Sympathies Store.

There are no events scheduled. You can still show your support by sending flowers directly to the family, or planting a memorial tree in memory of William Joseph "Bill" Gormley.
Visit the Heartfelt Sympathies Store

We encourage you to share your most beloved memories of William here, so that the family and other loved ones can always see it. You can upload cherished photographs, or share your favorite stories, and can even comment on those shared by others. 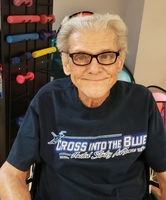