To share your memory on the wall of Thomas Lizada, sign in using one of the following options:

Print
Thomas Siador Lizada, 94 of Napili, Maui peacefully passed away on Friday, August 21, 2020. He was born in Binalonan Pangasinan, Philippines on September 7, 1925 to the late Marcelino and Dominga Lizada.

He is survived by his loving wif... Read More
Thomas Siador Lizada, 94 of Napili, Maui peacefully passed away on Friday, August 21, 2020. He was born in Binalonan Pangasinan, Philippines on September 7, 1925 to the late Marcelino and Dominga Lizada.

Thomas served in the Philippines Army for 2 years and Philippines Scout for 3 years. He immigrated to Hawaii in 1969 with the help of his late brother, Andres Lizada. In Hawaii, he worked at Maui Land and Pineapple Co., as well as Royal Lahaina Resort.

In 1942, Thomas married his wife, Genoveva in the Philippines. Over the years, their love for each other was inseparable celebrating their 50th anniversary in 1992 and their 75th anniversary in 2017. Thomas cherished his time spent with his family, where he would always share his life experiences.

Services will be held at Norman’s Mortuary with burial to follow at Valley Isle Memorial Park Cemetery.
Due to the ongoing pandemic of COVID-19, we advise to those in attendance of services, please wear a mask + practice social distancing.

To send flowers to the family or plant a tree in memory of Thomas Siador Lizada, please visit our Heartfelt Sympathies Store.

We encourage you to share your most beloved memories of Thomas here, so that the family and other loved ones can always see it. You can upload cherished photographs, or share your favorite stories, and can even comment on those shared by others. 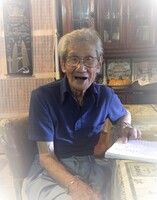