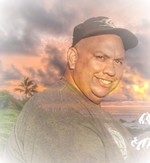 James Kalehuamakanoekauihololio Kai Oliveira, 36 of Hana, Maui peacefully passed away on Saturday, August 8, 2020. He was born on January 19, 1984 in Hana Maui to James Oliveira and Alice Kai.

He is survived by:
Father James Stuart Oliveira, Mother Alice Mokihana Kai; Sister Venell Kai - Jason Phillip, Brother Kinikalakua Oliveira - Shaelynn Day; Nieces & Nephews: Kaioonalani Tristian Beck, Tyrston-Prince Kaha'aheoona'alii Beck, Shaydlyn Kilina'u Singson, Shaynell Kekaili'ula Singson, Shantelle Wailani Kakeikionalani Kaiwi-Oliveira, Kinikalakua Ka'aihue Kaiwi-Oliveira; Grand Nieces: Kailea'owailoa Kamoanioukaikapola'i Santos, Kyani Kawaina'iauolelekea Santos.
He is predeceased by his Grandparents, Joseph "Pinky" Oliveira and Maria Leilani (Marciel) Oliveira, Francis Kikaha Lono and Margaret Pila Lono, Jovel and Mary Kai.
James K. K. Oliveira aka " Kalehua " graduated from Hana High School Class of 2002. He worked as a cook at Hotel Hana Maui & Travaasa Hana for over 15 years. He was a very comical person, always telling jokes and making people laugh. If he wasn't talking he was singing, playing the ukulele, guitar or even his square wash tub pakini bass our dad made for him. He had a passion for old school Hawaiian and Country music. Kalehua had an old soul and a big heart, so very joyful and always happy. On his free time he enjoyed operating back hoe's and tractors, rounding up cows, riding his Harley Davidson and spending time with his nieces and nephews. Kalehua is the middle child of three, but was often mistaken for the oldest because of his kind and humble ways, he was like a big teddy bear for everyone to lean on to. Kalehua will be missed dearly, but his memories will bring us comfort.
Due to the ongoing pandemic of COVID-19, private services will be held at Norman’s Mortuary.
To be in compliance, all those who are attending, please wear your masks and practice social distancing.