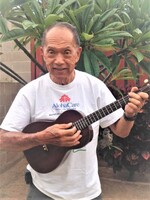 Donald Wah Chin Chai, 83 of Kahului, Hawaii peacefully passed away on
Wednesday, November 11, 2020 at Maui Memorial Medical Center. He was
born in Honolulu, Hawaii on November 9, 1937 to the late Gilbert and
Elizabeth Chai.

In 1959, after leaving the Air Force, Donald married Carole Richardson, who
was born and raised on Oahu and attended Farrington High School. On
August 29, 2020, they celebrated their 61st wedding anniversary. Together
they had 3 children: Jason, Lori, and Derrick. Starting in 1996, he had his first
grand-child, Kylyn, whom he was the excellent baby-sitter for her. He then
had 3 more grand-children Javan, Taytum, and Caleb in the years to follow.
Donald would always say how BLESSED he and Carole were because of his
loving family.

Donald and Carole lived on Oahu together after marrying from 1959 to 1970.
He was employed by Hawaiian Electric Company as a draftsman in 1960. He
and Carole were living at their home that they built in Kaneohe Oahu before
Donald decided to apply for a job at Maui Electric. He was chosen for the
position of customer engineering supervisor at Maui Electric in 1970. Donald
worked at the two utility companies for a total of 33 years before he retired
in 1993 at the age of 55. Throughout his many years, he served on the boards
for the association of the Maui parents of Kamehameha Schools Kapalama
and for the parents of Christ the King School. He was a long-time member of
Christ the King parish. He was an excellent ukulele player starting from his
teen-age years learning from his brother Richard and friends from the park.
He loved playing the ukulele and listening to Hawaiian music.

He enjoyed his retirement years. He travelled to their second home in
Kaneohe Oahu quite often. He loved to work outdoors in his yard. He
enjoyed golfing with his friends and meeting with his former classmates at the
Saint Louis Alumni clubhouse or at places to have lunch. He and Carole
enjoyed travelling together to celebrate their birthdays and anniversaries.
They often went to Las Vegas to celebrate. Sometimes the whole family
would go also and have lots of food and fun.

Donald had many wonderful doctors and nurses over the years. He received
excellent care from Kaiser Maui Lani and the Maui Veterans Clinic. The
family would especially like to thank the doctors and nurses and staff that
cared for him in his final days starting on October 27,2020 while at Maui
Memorial Medical Center. There were so many doctors and nurses that
helped him and our family during that time in the hospital. For his final day,
we would especially like to give our heart-felt and sincere aloha and mahalo
nui loa to Nurse Ray and Dr. Chung ; all the nurses and staff at Haleakala
South; and Ashley and Jenn and Arvee and the staff at Hospice Maui Hale.

Services are to be held at Norman’s Mortuary with burial to follow at
Maui Veteran’s Cemetery. Please contact the family
for further information.