To share your memory on the wall of Agrifina Cabebe, sign in using one of the following options:

Agrifina “Aggie” Terredanio Cabebe, 92, of Pukalani, Maui peacefully passed away on Monday, December 14, 2020. She was born in Paia, Maui on June 23, 1928 to the late Damaso & Marcelina Terredanio

Aggie is the fourth of the five children of Damaso and Marcelina. Tragically, Damaso passed away two years after she was born at the age of 35 and Marcelina eventually got remarried to Calisto Palos. Marcelina herself passed away at a young age in 1948 at 46.

After her schooling, she worked for a time at the Oriental Benevolent Society where she met Rafael Cabebe. After their courtship, they married on August 3, 1948 at the Church of the Good Shepherd in Wailuku.

Aggie gained an instant family when she married Rafael since he already had four children. Aggie was hired at Maui Pineapple Company as a clerk, standing out over other applicants with her shorthand skills. She worked there in HR for 43 years. She also worked nights and weekends as a store clerk at Peggy and Johnny’s and at MIMS Music. All this while raising 6 children.

After her family, Aggie’s greatest passion was dancing. Aggie and Rafael enjoyed ballroom dancing, but after seeing a Filipino folk dance performance by Ms. Aurelia Viernes on Maui, she was hooked. She began travelling to Honolulu to learn dances from Ms. Viernes. And thus the legendary journey began, with Aggie sharing her love with countless dancers that continued for decades. This also led to her involvement with the Miss Filipina Pageants. Her disciplined style earned her the nickname “The General.”

There are many more stories that could be shared about Aggie’s exploits over her long life. We invite you to share your favorite memory on the Ballard memory wall. Condolences may be sent to Marcia Paranada, 2908 Iolani St., Pukalani, HI 96768.

To send flowers to the family or plant a tree in memory of Agrifina Cabebe, please visit our Heartfelt Sympathies Store.

We encourage you to share your most beloved memories of Agrifina here, so that the family and other loved ones can always see it. You can upload cherished photographs, or share your favorite stories, and can even comment on those shared by others. 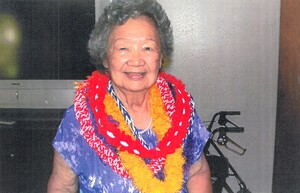